Health insurers would save fortunes by supporting people who want to heal themselves.

For over 40 years, hundreds of studies have shown that TM is particularly effective to improve health and prevent diseases. The TM research is really just the scientific evidence of the strength of our own body to heal itself. Transcending simply activates this inner healing power.

Health insurers (and ultimately the taxpayer in the case of public health care) could save a fortune if they would financially support those who want to learn how to keep themselves healthy, rather than supporting them when it is already too late. Prevention is always much cheaper than cure.

Yet in spite of all the scientific evidence, a TM course is still not reimbursed in Switzerland. Insurance. This has more to do with political reasons than with scientific reasons: the lobby of those branches of the health industry that would lose money if people would discover that they are far more powerful to heal themselves than they could ever have imagined.

We, as a non-for-profit organization, do not have the resources to set up a counter lobby and this would also go against our principles. We can only offer something that works, and hope that enough people will put pressure on the health insurance funds and on the government to support it.

In the mean time, we have found a number of private sponsors who can support people in financial need. For more information on the TM-course, course contributions and sponsorships, go to TM course.

Scientific research: prevention is much cheaper than the cure

Here are some of the most impressive studies demonstrating how much money could be saved. 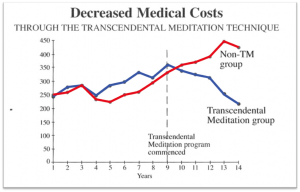 Another large-scale study in the U.S., where 5 years of health statistics of 2000 TM practitioners were compared with the standard, came to a similar conclusion: a 50% decrease in hospital admissions for the younger group and a 70% decrease for the TM practitioners who were more than 40 years old.

The more detailed statistics showed a significant lower hospital admission rate for all disease categories except childbirth, including a 60% reduction in cancer and a 87% reduction in heart-disease.

However, the most impressive studies about TM are the studies about the cardiovascular diseases in collaboration with the National Institutes of Health, the health research centre of the American government. During the last 20 years, they have spent more than $ 25 million US, specifically on the research on the effects of TM on blood pressure, diabetes, arteriosclerosis and heart disease, to come to the conclusion that it works, and that it is the only alternative method that really appears to work. This means: obtaining the same or even better results as the ones that can be obtained with medication but much cheaper and without side effects.

A randomized controlled study of 5 years with 200 heart patients found out that, among the 100 TM practitioners, there were 48% fewer cases of heart attack, stroke or death, a result that has never been seen before with a purely mental technique. Cardiovascular diseases are by far the most expensive health problem out there. This was a study with existing heart patients who only learnt about TM when the problems had already occurred.

Based on these results, the American Heart Association now formally recommends that TM be considered in the treatment of hypertension and heart disease.

What the Media is saying about TM

What people are saying

I have done so many meditation courses, but there was always something that felt not right; I missed something. I did not feel satisfied. When I learned TM, it felt just like coming home to me. Finally I have found it.

This technique is truly one of a kind.

I am meditating now for almost 30 years and my general health is excellent, especially when compared to my peers. Not only did it make my creativity grow remarkably, but also my ability to deal with a team of employees and actors in an inspiring and stimulating way.

I am still amazed on a daily basis to see how such a simple, natural technique can generate so many positive effects. And it is also nice to do.